The Risks of a Greek Collapse? 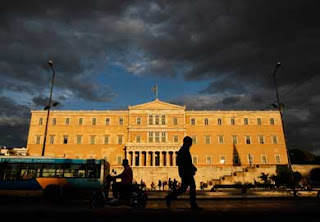 Alexis Papachelas of Kathimerini reports, The risks of a Greek collapse:

While Greece seems to be engrossed in its “success story,” the country’s partners appear more concerned with its “stability story,” in other words whether or not the country will stay on an even keel.

There are several reasons why this is what they are most interested in. Portugal is on the brink of a major political crisis; Italy seems unable to find solutions to its problems, and an out-of-control collapse in Greece would complicate this already tenuous situation.

There are also broader geopolitical reasons. The Americans and the Europeans are becoming quite frightened by the chaos in the Middle East, especially at a time when Israel is particularly isolated. Their stance toward Turkey has also changed as they grow more and more concerned by the instability there and Prime Minister Recep Tayyip Erdogan’s arrogant behavior. A Greek “accident” is seen as very dangerous in such a climate.

Of course there are those who expect Greece to fail, but argue that even if does, it will find a way to get back on its feet. The majority of international observers and officials, however, do not take the possibility of a Greek collapse so lightly.

So what is the problem? The Greek political system and public administration are nowhere near achieving reform targets, even when these are lowered. The international community is aware that it can exert pressure on Athens until the end of the year when Greece hobbles to a primary surplus. But, as that time approaches and it feels that it only has a few more months to exert influence, the more pressure it will apply. And this is where the danger lies: Greece’s creditors may cause the crash by applying too much pressure.

In the middle of it all are the markets, either in the form of large funds willing to invest in the new low-cost Greece or in the form of lenders who would like to see the Greek bond market operate again.

Prime Minister Antonis Samaras believes that maintaining calm is the top priority. He hopes that an excellent summer in terms of tourism, public works projects due to begin imminently, the TAP pipeline and some good investment news will create a positive climate come the fall.

At the same time he is equally aware that the people are about to be hit with a cascade of taxes and that if these are not collected the fiscal gap will be hard to manage. No one can predict whether there will be a sense of positive shock or an even greater feeling of misery in the fall.

All of this, meanwhile, is taking place ahead of an anticipated clash between Berlin, the International Monetary Fund and Brussels right after the German elections over whether Greece should receive a further debt writedown and a different policy mix.

Having just come back from Greece, I can share a few thoughts with my readers on the state of the country and what to expect. In a nutshell, here are the main problems in Greece:
And while I write on Greece, the truth is this is a European problem. We are witnessing the same backlash in Portugal, Spain, Italy and now in France.

Some concluding thoughts from my trip to Greece:
Below, Greek Administration Reform and E-Governance Minister Kyriakos Mitsotakis talks about plans to sack 15,000 state employees and put another 25,000 on notice for possible dismissal. Ryan Chilcote reports from Athens on Bloomberg Television's "Countdown."