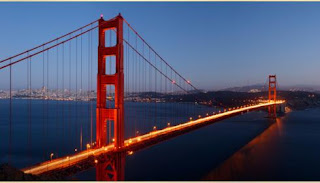 
The nation's two largest public pension funds on Monday reported double-digit annual returns from rising stock and real estate prices, but cautioned against focusing too much on short-term performance.

"When things got rough, we didn't panic," Dear said in a statement. "We stuck with our exposure to growth assets and applied the lessons we learned from the past."

Both funds outperformed their discount rates of 7.5 percent, the projection CalPERS and CalSTRS uses to meet current and future obligations.

Despite the gains, California's public pensions remain underfunded. CalPERS has an estimated unfunded liability of $100 billion, while CalSTRS reports a funding gap of $70 billion.

"This year reminds us that a pension fund measures its health over the long term and no single year can take us from underfunding to funding adequacy," said Jack Ehnes, CalSTRS' chief executive officer, in a statement.

Henry Jones, a CalPERS board member and chairman of its investment committee, also called for looking ahead.

"CalPERS is a long-term investor and we try to not focus too much on one year of performance," Jones said. "But obviously 12.5 is a great number and we're pleased with the performance."

Dear said in a call with reporters Monday that domestic and international stocks at the nation's largest public pension system returned 19 percent, outperforming its benchmark by nearly 1 percentage point.

"I think these numbers are convincing evidence that CalPERS has the ability to produce good return on a sustainable basis," he said.

You can read details of CalPERS' results in this press release. As shown below (click on image), the gain was led by strong performances in global public equity and real estate investments. Investments in domestic and international stocks returned 19 percent, outperforming the CalPERS custom public equity benchmark by nearly one percentage point. Investments in income-generating real properties like office, industrial and retail assets returned 11.2 percent, outperforming the Fund's real estate benchmark by 1.4 percent. 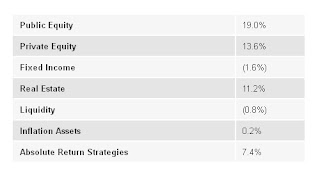 Details of CalSTRS' results are available in this press release. As shown below (click on image), the gain was led by global equity, private equity and real estate. Real estate and inflation sensitive assets outperformed their benchmarks by 3.6% and 3.3% respectively while private equity underperformed its benchmark by 4.1%. 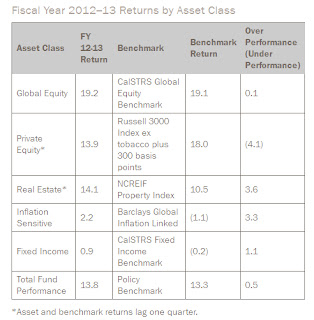 Note, however, the benchmark in private equity is the Russell 3000 ex tobacco + 300 basis points and results of assets and benchmarks for private equity and real estate are lagged by a quarter. CalSTRS' private equity benchmark is one of the toughest benchmarks in the industry and next to impossible to beat when U.S. stocks are soaring as they have been doing since the start of the year.

The results from CalPERS and CalSTRS are impressive but as they state, one year doesn't mean anything in the pension fund industry. Moreover, both funds are dealing with sizable funding gaps which need to be addressed. Strong investment gains and higher interest rates will help but not suffice to bring these giant funds back to fully-funded status. The same goes for many other other U.S. public pensions which are in far worse shape.

A few other things worth noting on CalTRS and CalPERS:
I can assure you that travel expenses are a huge part of the budget for any public pension fund and these expenses are justifiable as they pertain to due diligence on investments and networking/ research/ industry conferences. At least CalPERS and CalSTRS publicly disclose the travel expenses of their senior officers and board members.

Finally, CalPERS announced last month that Joe Dear, its CIO, was undergoing treatment for prostate cancer. While still working, Dear ceded some of the day-to-day investment operations to Theodore Eliopoulos, a senior investment officer. I wish Joe Dear a speedy recovery and remind my readers that prostate cancer is the most common non-skin cancer in America, affecting 1 in 6 men, and treatable once detected early.

Below, Chris Ailman, CalSTRS CIO, discusses the rise in market volatility, the Fed's monetary policy and Japan's economy with a panel on CNBC. Ailman recently spoke with CNBC's Brian Sullivan, discussing their results and providing three tips to retire rich (see below). Click on this link to watch full clip.