CDPQ Warms Up to Solar 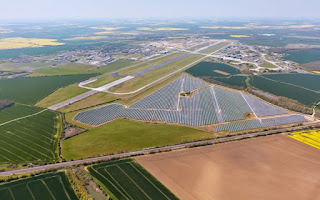 
The facility will initially be used to finance a diversified portfolio composed of over 100 solar projects located across various countries and totalling more than 700 MW. Over time, the facility could expand with further investment from CDPQ funding assets developed through the Lightsource BP pipeline.

This partnership aligns perfectly with CDPQ’s investment strategy in addressing climate change through low-carbon investments. Alongside Lightsource BP, it invests in solar projects, an asset class that will continue playing a key role across the energy transition landscape.

Founded in 2010, Lightsource BP has established operations across EMEA, APAC and the Americas, supported by an in-house team of over 350 specialists. With over 2 GW of solar capacity currently under management, Lightsource BP’s ambition is to become the world’s first global solar brand, targeting around 10 GW in the next 5 years.

CDPQ’s Executive Vice-President, Fixed Income, Marc Cormier explained in the press release that the CDPQ is eager to support the development of renewable energy sources, and they have in fact increased their 2020 investment target for these assets. He said, “Lightsource BP has high-quality assets and has built itself an enviable positioning in its industry.”

BP was one of the first oil giants to put a focus on alternative energy with an $8 billion initial  investment and the slogan “Beyond Petroleum”.

It got back into solar power a couple of years ago with a $200 million investment in  Lightsource (a 43% stake), and the company was renamed Lightsource BP.

BP expects solar to generate about a third of the world’s total renewable power and up to 10 per cent of total global power by 2035. Lightsource currently has over 2 Gigawatts (GW) of solar capacity under management.

Lightsource BP's CEO Nick Boyle once remarked: “The beautifully attractive thing about solar is the fact that it creates very predictable long-term revenue streams.” Just the sort of investment, in other words, guaranteed to appeal to pension plans.

Nonetheless, I was a bit confused as to why Lighthouse BP needed external financing from CDPQ when its major shareholder is one of the biggest oil companies in the world. I can only speculate that BP doesn't want to make additional significant investments in Lighthouse BP at this time and it made perfect sense to aproach a long-term institution to finance these operations (freeing BP's assets to invest elsewhere).

In any case, I'm certain Lighthouse BP received attractive terms as did CDPQ. These are definitely the type of private debt deals CDPQ should be targeting.

You can also review CDPQ's 2018 Stewardship Investing Report for details on its approach to low-carbon investing and find out more on why it's a global leader in responsible investing.

Below, Lightsource BP is a global market leader in the development, acquisition and long-term management of large-scale solar projects and smart energy solutions. Their projects generate competitively-priced, dependable, clean energy for businesses and communities.

Lastly, watch a couple of short clips on Lighthouse BP's Australian and US presence.