The Coming US Pension Crisis 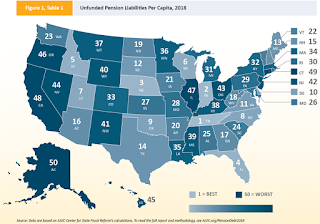 John Mauldin recently wrote a comment in Forbes on why the coming pension crisis is so big, it's a problem for everyone. I will let you read his article but the gist of it is this:


Almost all public pension funds assume investment returns somewhere around 7% (and some as high as 8%+). That’s highly unlikely due to the debt we’ve accumulated, and debt is a drag on future growth.

If you make more realistic assumptions on future returns the unfunded liability becomes $6 trillion according to the American Legislative Exchange Council.

So how bad is the situation? Some states like Kentucky are well past the point of no return. Illinois's public pensions are underfunded by $134 billion and some think it's far worse. Rhode Island’s locally run pension plans have close to $2.5 billion in unfunded obligations.

According to Pew, New Jersey's public pension system is so underfunded that it could run out of money in 12 years. Colorado could deplete its retirement fund assets by 2044 because the state lacks policies to manage volatile financial markets. And while Pennsylvania and Connecticut have taken steps to stabilize their systems, such as increasing state contributions, policymakers face the prospect of high pension costs for years to come.

Last year, Pew pegged the cumulative gap between state pension fund assets and liabilities at $1.4 trillion, a figure which is high but considerably less than the recent $6 trillion figure from the American Legislative Exchange Council. ALEC's higher figure is due to using a lower discount rate to determine future liabilities.

More troubling is this:


The median return assumption was 7.5 percent for public pension plans in 2016, but many analysts expect returns to be a full percentage point lower over the next two decades. Some say there is about a 1 in 4 chance that returns may not rise above 5 percent in that period. Although many states have lowered their assumed rates of return, fund investment targets still exceed industry estimates at a time when state reporting does not adequately account for economic uncertainty and market risk.

The discount rate US public pensions are using is still too high but states are reluctant to lower it for the simple reason that to do so would require increasing the contribution rate and possibly other politically unpalatable measures.

In Canada, large public pensions are using much lower discount rates and even though many are fully funded, they're still lowering their discount rate further to build a reserve cushion (eg., CAAT Pension Plan, OMERS, OPTrust, OTPP, and HOOPP).

There are other structural flaws impeding many US public pensions which Canada's large public pensions have addressed by adopting good governance and a shared risk model.

Good governance means pensions can pay their employees very competitively to manage more assets internally, lowering the overall fees while delivering strong long-term returns. Shared risk means the cost of the plan is shared more equitably among employers and employees so in the case of a deficit, they can increase contributions, lower benefits (typically through conditional inflation protection), or both until the plan's fully funded status is restored.

The problem is most US public pensions haven't adopted either of these measures which explains why they're in such a dire situation. The ones that have, like Wisconsin, are doing well and will survive the coming pension crisis.

Unfortunately, when the next crisis rolls around, many chronically underfunded US public pensions will be hit so hard that politicians will be forced to take very difficult decisions to keep these plans afloat.

Below, PolicyEd explains why state and local governments all around the country have failed to set aside enough money to pay for the pensions they have promised to workers in the public sector. I wouldn't go as far as saying they should be using the risk-free rate to discount pension liabilities but clearly something needs to change.