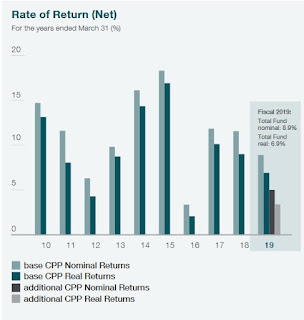 Today, the Canada Pension Plan Investment Board (CPPIB) reported impressive results for fiscal year 2019. It achieved a 10-year and five-year annualized net nominal returns of 11.1% and 10.7%, respectively. The Fund returned 8.9% net of all costs:


“CPPIB continues to deliver strong absolute and relative returns, and our robust 10-year performance demonstrates our long-term contribution to the sustainability of the CPP,” says Mark Machin, President & Chief Executive Officer, CPPIB. “We have gradually built a diversified, global investment platform and focused on executing our multi-year strategy – these are key drivers of our financial performance and our future success.”

Fiscal 2019 brought on a range of market conditions, including a public equity market downturn in December, which was bookended by rising equity markets at the beginning and end of the period. CPPIB’s portfolio management strategy benefits from ascending public equity markets, while alternative assets and our private investments can help to moderate the impact of significant market drops, even as they produce growth over longer periods.

“The role of diversification came through clearly this year, and we were encouraged to see nearly all investment departments contributed positively to our results. CPPIB’s investment teams also took advantage of our international reach and competitive strengths to pursue select transactions as well as explore new areas of growth,” Mr. Machin added.

I had a chance to talk to Mark Machin and you can read highlights of our conversation at the end after reading my quick analysis of CPPIB's fiscal 2019 results.

As shown above, over the last 5 and 10 years, CPPIB has gained 10.7% and 11.1% annualized respectively, and 8.9% and 9.2% annualized real returns over these periods. This is well above the long-term 3.9% real rate of return assumed for CPPIB's Reference Portfolio in the 27th Actuarial Report.

Clearly, over the long run, the shift into global private markets is working for CPPIB as it has helped the organization deliver on its mandate. 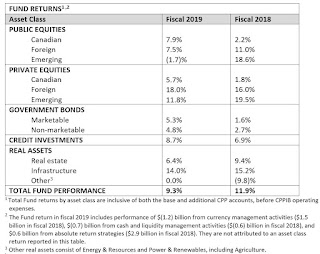 All asset classes except for emerging-market equities contributed to the positive performance but the biggest contributors to the overall performance in fiscal 2019 were Foreign Private Equities, gaining 18%, followed by Infrastructure (+14%), Emerging Private Equities (11.8%), and Credit Investments (+8.7%).

Next, have a look at the change in CPPIB's asset mix over the last fiscal year: 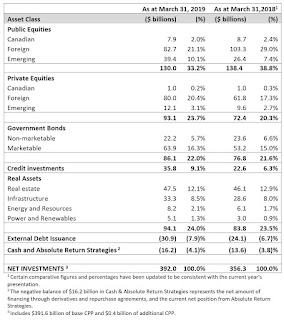 In line with their active management strategy, Public Equities were reduced from 38.8% to 33.2% over the last fiscal year while Private Equities increased from 20.3% to 23.7% and Credit Investments were up from 6.3% to 9.1%.

It's also worth noting that external debt issuance increased from 6.7% to 7.9% of total assets over the last fiscal year as the Fund capitalized on its AAA credit rating to issue more debt to invest in renewable energy and other private market investments all over the world.

It's worth taking some time to read page 56 of the Annual Report and CPPIB's Statement of Investment Objectives, Policies, Return Expectations and Risk Management for the Investment Portfolio of the Canada Pension Plan, which is available here to understand the Reference Portfolio.

As shown below, the CPPIB's Reference Portfolio for base CPP returned 6.6% in fiscal 2019 and for additional CPP, it gained 7%: 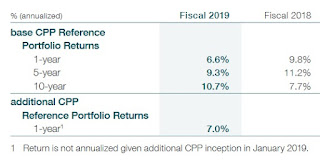 The key thing to understand is CPPIB's Reference Portfolio for base CPP or additional CPP isn't easy to beat, it's made up of 85% Global public large/mid-cap equity (including Canada and emerging markets) and 15% Canadian Federal and Provincial Governments Nominal Bonds.

This is a tough benchmark to beat on any given year so outperforming this Reference Portfolio over 1, 5 and 10 years is extremely impressive.

Late this afternoon, I had a chance to speak with Mark Machin and Michel Leduc. I thank both of them for taking some time to speak with me on such short notice.

Below, I provide highlights from our conversation:
I agree which is why I totally understand CPPIB's shift to emerging markets. Mark spoke very highly of Suyi Kim and her team and told me it was her (not him which is what I thought) that opened their Hong Kong office in 2007.

For all details, read CPPIB's full press release and the entire fiscal 2019 Annual Report which is available here.

Once again, I thank Mark Machin and Michel Leduc for taking the time to speak to me.

Below, Mark Machin, president and CEO of the Canada Pension Plan Investment Board, discusses the plan's investment strategy and why he's worried about the rise of geopolitical tensions with Bloomberg BNN's Amanda Lang.