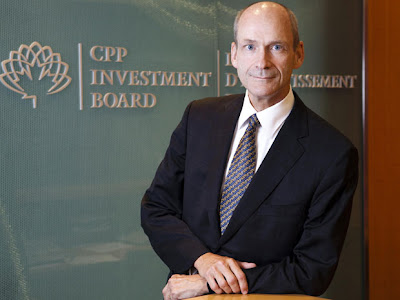 Barbara Shecter of the Financial Post reports, David Denison stepping down as head of Canada Pension Plan Investment Board:

David Denison is stepping down as head of the Canada Pension Plan Investment Board on June 30.

He will be replaced by Mark Wiseman, 41, who is currently executive vice-president of investments at CPPIB, the investing arm of the Canada Pension Plan.

Mr. Denison, who turns 60 this year, informed the board of CPPIB in June of 2009 that he intended to retire in 2012. He has been chief executive and president since January of 2005.

Mr. Wiseman joined CPPIB that same year, making the leap from the Ontario Teachers’ Pension Plan. He has been responsible for CPPIB’s overall global investment programs, along with other responsibilities related to the organization’s long term strategy.

Mr. Wiseman earned both an MBA and a law degree from the University of Toronto, as well as a master’s degree in law from Yale University.

“I can think of no one better suited and able to lead this great institution through its next stage of growth and evolution,” Mr. Denison said.

The board of directors unanimously selected Mr. Wiseman to replace Mr. Denison, according to Robert Astley, chair of CPPIB’s board.

Mr. Wiseman praised his predecessor, and said he looks forward to “taking the helm at a time when CPPIB is playing an increasingly important role globally.”

David Denison did an excellent job while at CPPIB. A bit surprised he's retiring so young -- after all, he is only tuning 60 and still jogs 5 miles a day at the crack of dawn! (so I hear)

But the board picked an excellent candidate to replace him. Never met David Denison but have met and spoken with Mark Wiseman on a few occasions and think he's a smart, hard working guy who knows his stuff and knows how to manage a team.

My only concern is that the board of directors "unanimously selected" Mark without opening the process up to external candidates first. This wasn't a smart move on their part and some will rightly criticize the selection process.

Regardless, I like Mark Wiseman on a personal level and think he is more than qualified to assume the responsibilities of President & CEO of CPPIB. He's got his work cut out for him and some big shoes to fill. I wish him all the best as he takes over the helm of this organization and wish David Denison the best with his future plans (will he replace Paul Cantor as chair of PSPIB?).

Below, Bloomberg's Dominic Chu reports on the possible hundreds of billions of dollars the 100 largest U.S. pension plans may have to pay in the next few years. He speaks on Bloomberg Television's "In The Loop." Read the Bloomberg article here.