Guess Who's Coming to Dinner? 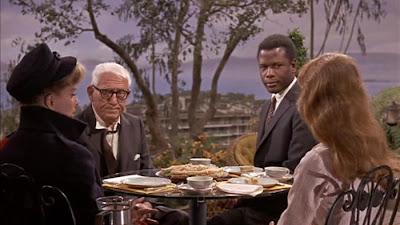 Tonight, it's the 84th annual Academy Awards. The countdown is underway in Hollywood:

Hollywood takes the spotlight itself on Sunday for the 84th annual Academy Awards, the world's most prominent celebration of film.

Final preparations for Tinseltown's biggest night have progressed throughout the weekend at the Hollywood & Highland Center (formerly known as the Kodak Theatre) in Los Angeles.

Outside, the red carpet has been uncovered by a team of workers on Saturday, while international media crews staked out their locations. Inside, jeans-clad stars including Tom Hanks and Meryl Streep took part in rehearsals. Other presenters will include Tom Cruise, Halle Berry, Angelina Jolie and Michael Douglas.

Show producers Brian Grazer and Don Mischer have revealed that comedy will play a significant part of Sunday night's broadcast, which will see the return of Billy Crystal, a perennial favourite Oscar host.

According to Grazer, Crystal will revive two of his traditional Oscar trademarks: a best-picture nominees sequence where the comedian appears in scenes from each film and a musical tribute to the finalists.

Funny moments are also expected when the likes of Will Ferrell, Zach Galifianakis, Tina Fey and the cast of the blockbuster comedy Bridesmaids take the stage.

Before the show, Sacha Baron Cohen is expected to make a splash after the Hugo co-star vowed to walk the red carpet in character as a faux, Middle Eastern despot — a stunt for his upcoming film The Dictator that the British comedian and actor previously used for films such as Borat and Bruno.

Crystal is emceeing the awards for a ninth time, deciding to step in with Grazer and Mischer in late 2011 after the exit of original show producer Brett Ratner and host Eddie Murphy.

Martin Scorsese's 3D children's tale Hugo and the black-and-white silent film homage The Artist, which as dominated the film awards season, are the top contenders heading into Sunday's gala, with 11 and 10 nominations, respectively.

Another film favoured to emerge with some Oscar hardware is Alexander Payne's Hawaii-set family drama The Descendants.

Streep's portrayal of former British prime minister Margaret Thatcher in The Iron Lady and Viola Davis's turn as a determined black maid in the civil rights-era tale The Help are the frontrunners for the best actress trophy.

The best actor race seems to be a contest between The Artist's Jean Dujardin and George Clooney for The Descendants.

After winning supporting actor honours at a number of other award shows, Canadian acting icon Christopher Plummer is widely anticipated to win the corresponding Oscar as well for his work in Beginners.

Other Canadians vying for an Academy Award include:

I haven't seen Monsieur Lazhar yet but it looks great. I recently saw The Descendants and loved it. George Clooney delivered an incredible performance. My mom told me to go see The Iron Lady. She's a huge fan of Meryl Streep and so am I but watching a movie about Maggie Thatcher doesn't appeal to me at a time when the winds of austerity threaten Greece, Europe and the rest of the world.

I'll be honest, I rarely go to movies anymore. If I am going to haul my ass to sit two hours in a movie theater, it better be worth it. Hollywood just doesn't produce as many great movies as it used to. Last night, I watched Guess Who's Coming to Dinner, a classic groundbreaking 1967 movie about an interracial couple and the white parents' reaction upon meeting the black boyfriend for the first time.

I dream about writing a great movie one day. A buddy of mine who's an entertainment lawyer has been pushing me to write a script. What will the movie be about? Well, you'll just have to wait and see but like my favorite movie, The Shawshank Redemption, it's based on hope and perseverance. Think George Clooney could direct and star in it.

My buddy shared these comments with me:

Those were two fabulous movies. You’re right, gems are harder to come by these days. Decisions are made by 20-year-old MBAs who answer to shareholders and would not know a good script if one bit them in the ass. Not like the old studio tycoons of the golden era. But, occasionally, a gem will still fall into one’s lap. I still love the movies.

Me too. Below, the trailer of Guess Who's Coming to Dinner. You can watch the entire movie by clicking here. I also embedded the trailer from The Shawshank Redemption. Enjoy the Academy Awards and always remember, "get busy living or get busy dying." On that note, off to enjoy this sunny (but cold) day in Montreal.