Houston, We Have Liftoff? 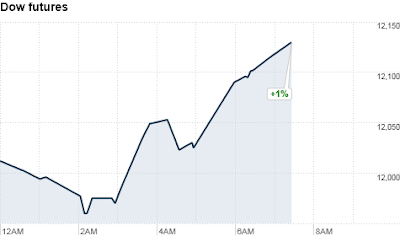 U.S. stocks are gearing up for a higher open Friday, after a majority of European leaders agreed on a new deal to try to resolve the eurozone debt crisis. Reuters reports that UK isolated as Europe moves ahead on fiscal union:

Europe divided on Friday in a historic rift over building a closer fiscal union to preserve the euro, with a large majority of countries led by Germany and France agreeing to forge ahead with a separate treaty, leaving Britain isolated.

Twenty-three of the 27 leaders agreed to pursue tighter integration with stricter budget rules for the single currency area, but Britain said it could not accept proposed amendments to the EU treaty after failing to secure concessions for itself.

After 10 hours of talks, all 17 members of the euro zone and six countries that aspire to join resolved to negotiate a new agreement alongside the EU treaty with a tougher deficit and debt regime to insulate the euro zone against the debt crisis.

Sweden, Hungary and the Czech Republic said they needed to consult their parliaments.

"Not Europe, Brits divided. And they are outside of decision making. Europe is united," Lithuanian President Dalia Grybauskaite said in blunt English on arriving for the second day of the bloc's eighth crisis summit this year.

European Central Bank President Mario Draghi called the decision a step forward for the stricter budget rules he has said are necessary if the euro zone is to emerge stronger from two years of market turmoil.

"It's going to be the basis for a good fiscal compact and more discipline in economic policy in the euro area members," Draghi said. "We came to conclusions that will have to be fleshed out more in the coming days."

European leaders’ blueprint for a closer fiscal union to save their single currency left the onus on central bankers to address investor concerns that Italy and Spain would succumb to the two-year-old financial crisis.

While European Central Bank President Mario Draghi hailed the accord struck at all-night talks in Brussels, investors called for him to expand his crisis-fighting arsenal to ensure debt-addled nations can pay their bills. Italian and Spanish bonds fell today even with the ECB said to be buying them in the market.

“The leaders have now defined the end point they want to reach in terms of fiscal governance, but it’s a long way to go there,” Thomas Mayer, London-based chief economist at Deutsche Bank AG, told Bloomberg Television. “We’ll probably see more near-term tension and that will probably then trigger a more hands-on intervention by the ECB.”

Nineteen months since euro leaders forged their first plan to contain the debt turmoil, their fifth comprehensive effort added 200 billion euros ($267 billion) to the warchest and tightened rules to curb future debts. They sped the start of a 500 billion-euro rescue fund to next year and dropped a demand that bondholders shoulder losses in rescues.

I knew they would end up saving the euro. All this drama was sensationalized to scare away retail and institutional investors while the real smart money was scooping up shares and risk assets on the cheap. Get ready, La Dolce Beta is coming back and this time those banksters are really going cash in on their money for nothing and risk for free.

Print Mario, Print! The Titanic "iz not sinking." It's RISK ON from now on and smart money is gearing up for the Mother of All Melt-Ups! Houston, We Have Liftoff! That's the only thing you should be 'thinking' about! (funny clip below; h/t Mahe Erwan)