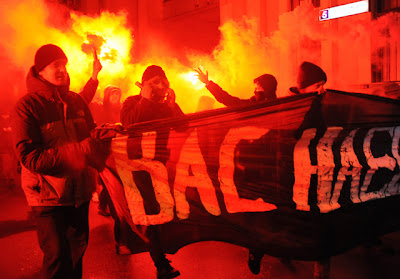 Income inequality is at its highest levels in three decades, according to a new report from the Organization for Economic Development and Cooperation. The trend is no accident, the group says, but rather the result of a combination of spending cuts on social programs and lower taxes on the wealthy.

Tax and benefit systems play a major role in reducing market-driven inequality, but have become less effective at redistributing income since the mid-1990s. The main reason lies on the benefits side: benefits levels fell in nearly all OECD countries, eligibility rules were tightened to contain spending on social protection, and transfers to the poorest failed to keep pace with earnings growth. As a result, the benefit system in most countries has become less effective in reducing inequalities over the past 15 years. Another factor has been a cut in top tax rates for high-earners.

“There is nothing inevitable about high and growing inequalities,” said OECD Secretary-General Angel Gurria.

The United States, which has seen a wave of national protests focused on the gap between rich and poor, did not fare well in the report. Of the 34 nations in the OECD, the U.S. has the fourth highest level of inequality, after Chile, Mexico and Turkey.

Some other findings for the United States:

– The wealthiest Americans have collected the bulk of the past three decades’ income gains. The share of national income of the richest 1 percent more than doubled between 1980 and 2008 from 8 percent to 18 percent.

– The rising incomes of executives and finance professionals account for much of the rising share of top income recipients. Moreover, people who achieve such a high income status tend to stay there: only 25 percent drop out of the richest 1 percent in the United States, compared to some 40 percent in Australia and Norway, for instance.

– The main reason for widening inequality in the United States is the growing wage divide. The gap between the richest and poorest 10 percent of full-time workers has increased by almost a third, more than in most other OECD countries.

Economic inequality is a theme that I've covered many times on this blog. The global disconnect will be the biggest problem facing developed and emerging markets in the next decade. In the US, absolute power has corrupted both parties as they continue spreading lies, damned lies and statistics. Meanwhile the banksters profit from money for nothing and risk for free while hard times generation struggles to get out of poverty, living out of cars or worse.

But this isn't just a US problem. All around the world the entrenchment of deep inequality is threatening democracy and global stability. As I've written before, this will continue until the meek become the masters. That's why Russia's Prime Minister moved quickly to introduce Putin 2.0 plans to stem discontent. Russia is a model of economic inequality where a handful of "elite mafiosos" plunder the country's wealth.

And over in Europe and the UK, another battle is raging between the Anglo Saxon British-American model of capitalism and the German and European model which is somewhat more humane. This is what economists and political commentators are not grasping as they remain transfixed on the latest developments over there.

The truth is that austerity is doomed to fail because it will exacerbate economic inequality. The real story behind the eurozone summit is that the same forces working hard to dismantle public sector pension plans are hard at work, pandering to the banksters who got us into this mess while harsh austerity measures are imposed on the restless many. It's enough to make one break down and cry, which is exactly what Italy's Welfare Minister, Elsa Fornero, did as she was unable to say the word "sacrifices." I also embedded a report on Chernobyl's unrest over pensions, which ended up with the tragic death of a disabled minor. Finally, Nassim Taleb discusses "second generation Marxist class struggle" and the political "Black Swan" (watch clips below).