Summit to End All Summits? 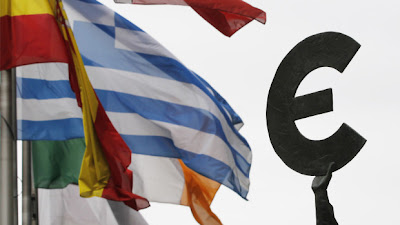 European stocks are up today, and I have no idea why. I’m with Felix Salmon — this looks like a disastrous meeting. More austerity, more posing of the crisis, wrongly, as being all about fiscal deficits; no mechanism for ECB funding. Somehow southern Europe is supposed to deflate its way to prosperity, while everyone runs a trade surplus, presumably against that potentially habitable planet we’ve discovered 600 light-years away.

Maybe Draghi’s actions will be very different from his words — but actually, since this is to an important degree about expectations, Europe needs both actions and words.

Oh, and for dessert (Oh well — and it’s a floor wax too!) we have Cameron acting as a spoiler to protect the wheeler-dealers, poisoning EU politics.

Cameron is going to go down in history as one of the worst leaders Britain ever had. His isolationist policies and blatant pandering to City banksters will bankrupt the UK economy and exacerbate economic inequality. Nick Clegg is understandably angry.

But let me continue on some valid criticism of the "summit to end all summits." Krugman is absolutely right. Southern Europe cannot deflate its way out of this crisis while everyone else runs a trade surplus. Joseph Stiglitz, another Nobel-prize winning economist, made the exact same point when he recently asked What Can Save the Euro?:

Public-sector cutbacks today do not solve the problem of yesterday’s profligacy; they simply push economies into deeper recessions. Europe’s leaders know this. They know that growth is needed. But, rather than deal with today’s problems and find a formula for growth, they prefer to deliver homilies about what some previous government should have done. This may be satisfying for the sermonizer, but it won’t solve Europe’s problems – and it won’t save the euro.

The limits of austerity are well known to intelligent economists. Yanis Varoufakis discussed the issue in an interview on German television a few months ago and in a recent interview on Capital Account with Lauren Lyster (see below). Professor Varoufakis's latest comment defends the Modest Proposal he and Stuart Holland put forward and discusses what the ECB ought to be doing now so as to end the crisis without Treaty changes, debt buybacks, haircuts or fiscal transfers.

Another staunch critic of the developments in the eurozone and pretty much all around the world is professor Michael Hudson. He also appeared on Capital Account this week to discuss his two most recent articles, Democracy & Debt and Europe’s Transition from Social Democracy to Oligarchy (see interview below).

Michael is rightly cynical of all these summits because he knows the financial oligarchs who hijacked democracies around the world will do everything to prop up failed banks and ask the rest of us to pay for it for the rest of our lives. You can kiss away your pensions because when push comes to shove, banksters have first dibs, and governments will raid pension funds to directly or indirectly capitalize failed banks.

In a most twisted and convoluted way, this is why I remain extremely bullish on financial and risk assets, calling for the Mother of all melt-ups. While many on the Left will rightly criticize this summit, I realize that banksters have already won the war and will do whatever it takes to reflate their way back to prosperity. Never mind what Goldman says, pay attention to where the real smart money is going. Watch interviews below. You won't find this stuff on CNN, FOX or CNBS!