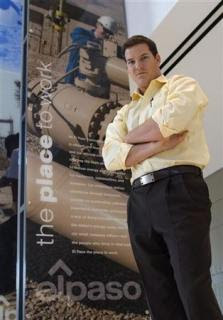 The California State Teachers Retirement System said it would vote its approximately 2.8 million shares of El Paso stock against the merger. El Paso has about 773 million shares outstanding, according to Thomson Reuters data.

"We have concerns with the lack of transparency and the apparent conflicts of interest that have surrounded the share appraisal process and we believe that shareholders may not receive full value for their shares should this transaction, as currently structured, be consummated," a CalSTRS spokesman said.

A shareholder group sued in January to stop the deal, arguing that El Paso adviser Goldman Sachs Group Inc (GS.N) and El Paso Chief Executive Douglas Foshee had vested interests in holding down the price for the company.

Goldman Sachs advised El Paso on the deal but also owns a sizable stake in acquirer Kinder Morgan through its private equity arm.

A Delaware judge called the negotiating process "disturbing" in a ruling last week, but refused to block the acquisition, saying shareholders should decide for themselves if they want to accept the deal.

While shareholders can still change their votes before the meeting, the company said on Monday that about 70 percent of its outstanding shares had already been voted as of March 2. More than 98.5 percent of those shares were voted in favor of the deal, El Paso said.

The company needs a majority of the votes cast in order to receive shareholder approval of the sale.

The deal was worth around $21 billion at the time it was announced in October, but the value of the proposed tie-up has risen, along with Kinder Morgan's stock price, since then.

Hedge fund manager Carl Icahn owns 9.3% of the company and another well known hedge fund, Farallon Capital Management owns 2%. Interestingly, Farallon initiated a big position in the company in Q4, and it wasn't alone. Paulson& Co, Renaissance Technologies, Brookside Capital Management, Lone Pine Capital were other well known hedge funds that initiated new positions in Q4, after the merger was announced. The stock has risen nicely ever since (click on image):

Not surprisingly, the share price of Kinder Morgan has also risen significantly since the merger was announced in mid October (click on image):

Brookside Capital owns shares of Kinder Morgan and Lone Pine Capital initiated a new position in Q4. The article states that Goldman advised El Paso on the deal and owns a "sizable stake" in acquirer Kinder Morgan through its private equity arm (conflict of interest to say the least).

What else? All these hedge funds bought positions in El Paso before Apollo Global Management agreed to the second-biggest private equity buyout of an energy producer in history with its $7.15bn deal for the oil and gas exploration arm of El Paso:

The firm joined with Riverstone Holdings, Access Industries and other investors to sign the agreement subject to the closing of a merger between El Paso Corporation and US energy company Kinder Morgan.

El Paso’s oil and gas exploration unit is one of North America’s leading domestic oil and natural gas producers, with a strong interest in the emerging shale-drilling market on the continent.

Last May El Paso said it would spin off the exploration arm to shareholders, but by October Kinder Morgan had agreed to buy the parent company and announced the subsidiary would instead be sold.

The firm suffered a $300m last year due to a dip in the fair value of its private equity and capital markets operations, compared to a $1.32bn profit the year before.

One thing is for sure, CalSTRS raises several good points on lack of transparency and apparent conflicts of interest but it remains to be seen whether other institutions will follow them and vote against the deal. I wouldn't bet on it as there are many large hedge funds that own sizable stakes in these companies and they have an interest to realize on their investment fairly quickly.

So does Goldman, which has taken top spot in M&A once again, spurred by natural resource deals. Below, a discussion on Bloomberg Markets’ eighth annual ranking of the best-paid investment banks by the fees they earn. Goldman took top spot, Morgan Stanley held on to the second spot, while JPMorgan Chase & Co. fell to No. 3 from No. 1 in the overall ranking. Dawn Kopecki reports on Bloomberg Television's "In the Loop."